DRAPER, Utah, July 19, 2022 (Gephardt Daily) — Police believe they are close to identifying a decomposing body found in a Draper canyon.

The body, which was male, was found in a dry creek bed just off the Ghost Falls trail in Corner Canyon, which is inside the city limits, Draper Police Lt. Pat Evans said.

“They were skeletal remains actually,” he said, which means considering terrain and proximity of wildlife and other factors, it’s hard to pinpoint exactly how long the body has been there.

The remains were discovered by a hiker around 8 p.m. Monday.

It was several hours before the State Medical Examiner’s Office could make it to the site, Evans said, to take the body back to Salt Lake City for autopsy and to confirm identity.

As of Tuesday afternoon the best estimate is a matter of years, likely more than three, he said, that the body lay at the site where it was found.

But officials are hopeful an identification can be made by Wednesday and next of kin notified.

“It’s policy that we have to treat it as suspicious, given the circumstances,” Evans said.

“But there are no signs of foul play,” he said, such as obvious wounds or even any preliminary indication of the cause of death. 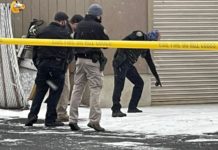