COTTONWOOD HEIGHTS, Utah, Sept. 12, 2018 (Gephardt Daily) — Police discovered a suspected drug lab in Cottonwood Heights after neighbors reported what they thought was a burglary attempt in the early hours of Wednesday morning.

Cottonwood Heights Police Department Sgt. Dan Bartlett told Gephardt Daily neighbors called police to report that a unit in the back of the Waterside Cove apartment complex in the area of 1200 E. Waterside Cove was being burglarized at around midnight.

But when officers arrived, Bartlett said, they discovered a man and a woman in the parking lot, allegedly trying to pack up two vehicles and drive away.

Bartlett said Orton attempted to flee on foot, throwing various drugs including heroin and methamphetamine out of his pockets as he ran. He was located and arrested and has been transported to the Salt Lake County Jail.

Detectives called a K-9 unit out that imprinted on the vehicles, then obtained a search warrant, and discovered a myriad of drugs, including large amounts of pills, vials and injectables, Bartlett said. He added that officers are still going through all these to determine the exact amount that was found.

Bartlett said that when detectives searched the car, they reported symptoms consistent with exposure to drug lab materials; burning in their eyes and noses, a strange feeling in their throats and headaches.

The then found glassware and chemicals and thought they had discovered a meth lab.

A hazardous materials team from Unified Fire Authority was then called out to decontaminate the officers and go through the materials that were found. The response was scaled back when the UFA team found it was not a meth lab, but a lab that was allegedly producing DMT, a potent psychedelic drug.

“It’s still dangerous, but it doesn’t have the same explosive properties as a meth lab,” Bartlett said.

He added that the two were being evicted from an apartment in the complex and officers believe they had moved the alleged drug lab from the apartment to one of the cars. Bartlett said the apartment houses various people and is a “crash pad.”

The pregnant woman was taken to hospital to be evaluated; Bartlett said she will be receiving help. 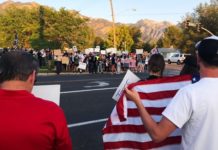