The new high comes a week after the July 4 weekend began, last Friday.

Two more deaths also were reported in the past 24 hours, a drop from the record of seven deaths on Thursday. The patients who died were:

“I know we can turn this trend around, and we can do it by practicing physical distancing, wearing masks, staying home and away from others when we are sick, and washing our hands regularly.”

Gov. Gary Herbert, speaking at a news conference on Friday, asked Utahn’s to wear masks voluntarily, but added that if numbers don’t decline to a daily average of cases in the low 500s, he may mandate the wearing of masks to slow the spread of COVID-19.

Herbert later extended a previous executive order mandating the use of “face coverings” in all state office facilities. He also ordered current Health Risk Status levels to remain in effect for communities in Utah until July 24, 2020.

Utah has had 28,223 positive cases of the virus, the Friday report says.

The rolling seven-day average for positive tests is 620 per day, representing a 10% rate of infection among those tested, which, according to Utah health officials, is also a record high.

In total, 207 people have now died as a result of the COVID-19 virus, the Utah Department of Health report says.

Those categorized as recovered, defined as still living three weeks after diagnosis, number 16,261.

To see the numbers broken down by area of the state, check the chart below. 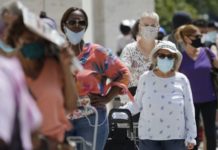