According to West Valley Police spokesperson Roxeanne Vainuku, dispatchers received a call at approximately 5:30 a.m. on reports of a stabbing at 3314 South Westcrest Road. When officers arrived, they discovered 30-year-old Dianna Robles had stabbed her mother seven times before running to a neighboring house and attempting to break into the home.

The suspect was not able to gain entry into the home and another neighbor, who heard the commotion and came outside, was attacked by Robles with the lid of a pan and sustained minor injuries.

Vainuku said the suspect then attempted to gain access to that neighbor’s trailer, but the neighbor was able to prevent her from getting inside.

“The suspect then broke into a parked van and tore apart the interior of the van,” Vainuku said. “When our officers arrived, Robles taunted the officers with a three-foot copper pipe, forcing one officer to deploy pepper spray and another to deploy his Taser, before finally gaining control of the suspect.”

Robles was taken to the hospital for examination before being booked into the Salt Lake County Jail on charges of attempted murder, aggravated assault, burglary, assault on an officer and criminal mischief.

The mother was also taken to a local hospital and treated for non-life-threatening injuries.

It is unknown at this time what was used to stab the mother, and the investigation is still underway. 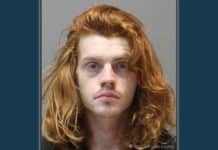