Guy Finicum, the brother of former occupier LaVoy Finicum, and former occupier Sharla Christie said the occupiers took good care of the facility during the siege that ended Feb. 11. Finicum said photos released by government officials were staged to make it appear as though there was a lot of property damage.

Finicum, who visited his brother LaVoy during the occupation at the refuge in January, said the $4 million estimate for the clean-up, and the $2 million supposedly spent on the standoff itself, is the government’s way of trying to bolster its case against the occupiers.

Fincum said some of the photos the government released were actually taken by the occupiers to show the mess left on the grounds before they arrived.

“These people were respectful people, they were sincere, they were speaking up in defense of the fellow citizens of Harney County; they were peaceful but they were resolved about getting their message out,” Finicum said. “But one thing that is absolutely certain is they were very serious about taking good care of that property.”

The standoff began on Jan. 2, led by Ammon Bundy to protest the punishment of Dwight and Steven Hammond, Oregon ranchers who were convicted of arson in 2012 under a domestic terrorism law after having already served several months in jail for the same offense.

The incident escalated into a weeks-long event with protesters from around the country joining in the takeover. LaVoy Finicum, 54, the group’s spokesman, was shot and killed as he and other occupiers were driving to a nearby town on Jan. 26 for a meeting. Bundy, his brother and 14 others, including Shawna Cox of Kanab, pleaded not guilty to a federal conspiracy charge. A trial is scheduled for April 29.

At the same time, Bundy’s father, Cliven, and 18 other people are facing charges stemming from a 2014 armed standoff with Bureau of Land Management agents, who had seized Bundy’s cattle, claiming he had been trespassing for decades by allowing his animals to graze on federal land without paying fees. 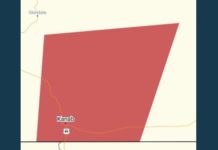