“To those who had a long pregnancy or a big baby, Poppy the zebra has you beat,” a Zoo statement says. “After a 12-month wait, the birth of an 87-pound male zebra was safely captured on camera at Utah’s Hogle Zoo. The healthy arrival happened July 23, 2022, at approximately 3 a.m. with mom, Poppy, a five-year-old Hartmann’s mountain zebra.

Within an hour after birth, the foal was standing on its own, nursing, and walking around, the Hogle Zoo statement says.

“By seven-hours-old, the foal started little gallops, known as ‘zoomies,’ which is a natural behavior for babies in the wild who must quickly be on the move from predators after birth.”

The baby’s birth, recovery and “zoomies” were captured on video on high-definition cameras donated by the Marriner S. Eccles Foundation and Backstreet Surveillance, Inc., the statement says.

“It is so important that we give mom and baby space and time to naturally connect in this start of life,” said Bob Cisneros, associate director of animal care at the zoo. “The 24-7 observation of the baby hitting its healthy milestones via cameras has taught us a great deal about these first moments that are rarely captured.

“We look forward to sharing our new addition with other children and parents and educating and connecting guests to the importance of preserving zebras in the wild.”

This is Poppy’s second successful birth at Utah’s Hogle Zoo, after a standard 12-month pregnancy. Through a recommendation from the Species Survival Program (SSP), Poppy was paired with father Scooby, the zoo’s 7-year-old Hartmann’s mountain zebra. The SSP looks at the genetic history of animal populations under human care for responsible breeding.

Guests can view Poppy and her new foal at the zoo’s African Savanna exhibit starting today, today, Aug. 1. The Zoo is at 2600 Sunnyside Ave. Find hours and admission costs here.

The foal’s name will be selected through a public online auction open through Friday, Aug. 5. To participate in the auction that includes a special meet and greet with Poppy and baby and breakfast at the zoo, visit stripes2022.givesmart.com.

Hogle Zoo shared video of the foal’s first steps and frolics, below. 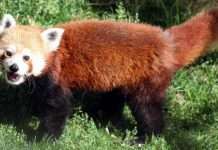 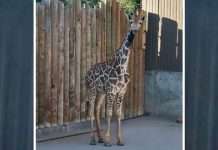