SALT LAKE CITY, Utah, Jan. 11, 2017 (Gephardt Daily) — Organizers of the Larry H. Miller Tour of Utah have announced the dates and host venues for the 2017 edition of the week-long men’s professional cycling race.

The Tour of Utah, scheduled for July 31 through Aug. 6, will begin in Logan and conclude in Salt Lake City, according to a news release from the City of South Jordan. Daily stages include four first-time hosts in Brigham City, Big Cottonwood Canyon, South Jordan City and Layton; challenging climbs in the Wasatch Range around Snowbasin Resort; a sprint finish in Bountiful; and the traditional Queen Stage from Heber Valley to Snowbird Resort.

“The stage destinations for the Tour of Utah change each year with the intention of bringing the sport of cycling to new people, presenting challenging courses for the riders, and showcasing the stunning scenery around the state,” said Jenn Andrs, executive director of the Tour of Utah, in a prepared statement.

“What remains the same is the excitement generated by the race, the gathering of local communities for a special event, and the performance of world-class riders. We look forward to organizing a great race for Utah this August.” 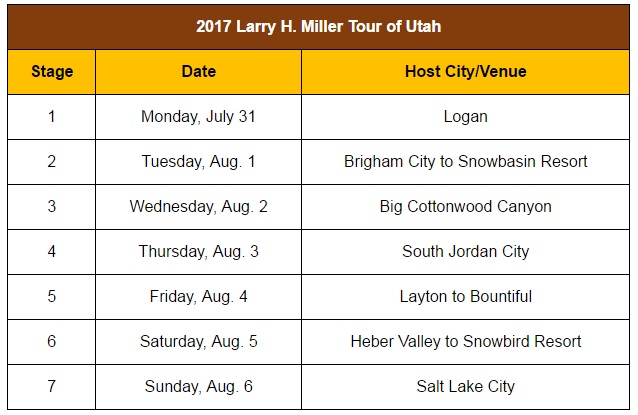 The race will begin on July 31 in Logan, which previously served as the overall start community for the 2015 Tour of Utah.

Brigham City will debut as a new host city for the start of Stage 2 on Aug. 1, and on Aug. 2, new host Big Cottonwood Canyon in Salt Lake County will be the site of an individual time trial for Stage 3.

Stage 4 will be in South Jordan City, a first-time Tour of Utah host community on Aug. 3. Davis County will be home for Stage 5 on Aug. 4 with the start in new host Layton City and the finish in Bountiful.

On Aug. 5, the Queen Stage will start in the Heber Valley en route to the Saturday finish at Snowbird Resort. Stage 7 and the final day of the 2016 Tour of Utah on Aug. 6 will take place in Salt Lake City.

Details regarding each stage route such as race mileage and formats, elevation gain, and start/finish times as well as spectator festivities will be announced in the late spring. Now in its 13th year, the Tour of Utah was elevated in 2015 to a 2.HC-rated UCI stage race, making it one of the top professional cycling events in North America.

In 2016, Australian Lachlan Morton of Jelly Belly presented by MAXXIS Cycling Team captured the overall general classification victory at the Tour of Utah which featured 705 miles of racing and 52,825 vertical feet of climbing.

The Tour of Utah attracted more than 400,000 spectators and contributed $23 million in direct economic impact for Utah last year.