GRAND COUNTY, Utah, Feb. 28, 2021 (Gephardt Daily) — A climber who was injured Saturday in a 20-foot fall in Long Canyon required extrication from a hard-to-reach area, and multiple agencies worked in concert to pull off the difficult rescue.

The climber, a 26-year-old woman from Steamboat Springs, Colo., fell in the Deadman’s Buttress climbing area and landed at the base of the Wingate sandstone wall, Grand County Sheriff’s Search and Rescue said in a Facebook post.

The injured woman was still hundreds of feet above the road in the canyon bottom.

“Rather than risk a time-consuming and dangerous nighttime multi-stage lowering operation down the extremely steep and rough talus, Classic Air Medical was called to see if they might be able to evacuate the subject,” the post said.

The Classic pilot managed a toe-in landing nearby to drop off medical personnel, but there was no way to get the patient into the chopper in what GCSSAR described as “such a precarious position.”

Grand County Sheriff’s Search and Rescue personnel brought the Technical Rock Rescue trailer to the accident site and assisted in coordinating the rescue.

The hoist helicopter from Utah Department of Public Safety had been dispatched as a back-up and was able to extricate the woman via hoist. She was transferred to Classic Air Medical and flown to a trauma center, the post said.

No information was available regarding her condition. 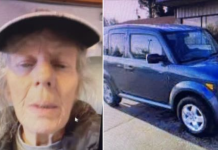