“Later this week, I’ll be in Utah to discuss the Bears Ears and Grand Staircase-Escalante National Monuments,” Haaland tweeted at 5:45 p.m. Monday. “I’ll meet with tribes, elected federal, state and local leaders, and other stakeholders to discuss how we can be good stewards of these sacred landscapes.”

“As Utah leaders, we urged the administration to extend the 60-day timeline outlined in President Biden’s executive order calling for a review of our national monuments and invited Secretary Haaland to visit Utah to tour the monuments and engage state, local, and tribal leaders. We are encouraged that the administration has extended the deadline for review of Bears Ears and Grand Staircase-Escalante national monuments, and we welcome Secretary Haaland’s decision to travel to Utah, tour the monuments in question, and receive meaningful input from the local elected officials and residents.

“Her trip to Utah will allow her the opportunity to speak with the people who live and work on the lands, whose voices may otherwise go unheard, before making any recommendations to the President. We are also confident that this trip will successfully highlight the need for a permanent legislative solution for determining appropriate boundaries for Bears Ears and Grand Staircase-Escalante national monuments, with statutory protections to prevent abuses under the Antiquities Act for the State of Utah. We look forward to continuing our work on these issues with Secretary Haaland after her visit.”

Biden’s executive order called for the submission of the secretary’s report within 60 days, or March 21. However, the Interior Department has since announced that the secretary would release her report in April after her visit.

“Secretary of the Interior Deb Haaland is looking forward to visiting Utah in April to meet with stakeholders, tribes, and elected leaders,” the department said in a statement. “The Interior Department’s report to the President on national monuments, as called for in Executive Order 14008, will reflect those conversations and will be transmitted to the White House following the trip.”

During Trump administration, former President Trump reduced the size of the monuments by some two million acres. 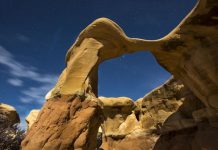 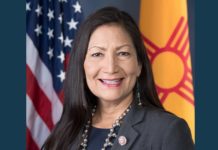