KAYSVILLE, Utah, Oct. 6, 2016 (Gephardt Daily) — It may seem like “just clowning around,” but police say vandalism and threats of violence are no joke.

School activities proceeded normally, but there were extra police around Fairfield, as well as other schools in the Davis district, according to a news release from the police.

Kaysville Police Sgt. Preston Benoit told Gephardt Daily that he wasn’t aware of any leads so far as to who was responsible for the graffiti, but said the school resource officer at Fairfield has been talking with students.

It also has been reported that authorities are checking surveillance footage from around the school, and they feel confident that the parties responsible for the vandalism will be found.

The graffiti incident comes on the heels of “clown threats” received via Instagram by some students at Weber School District’s Rocky Mountain Junior High School in West Haven. In that case, the 14-year-old student alleged to have threatened other students — albeit as a joke — was arrested and released today. He has been expelled from school and will have to appear in juvenile court on four counts of threats of violence.

Officials are asking that parents talk with their children about the serious legal consequences of vandalism and making threats, even as a joke or prank.

Anyone with information about the graffiti at Fairfield Junior High is asked to call 801-546-1131, or you can submit tips anonymously by texting KAYSVILLEPD to 847411. 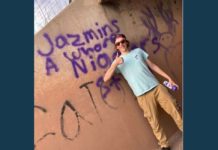 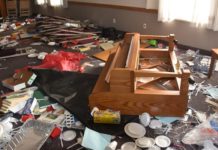 Vandals cause $50,000 of damage to West Jordan church