WEBER COUNTY, Utah, July 5, 2016 (Gephardt Daily) — All lanes of Interstate 84 westbound have reopened near Mountain Green at mile marker 90 as a grass fire burning in the area reaches 70 percent containment, according to officials.

The I-84 was closed westbound Monday afternoon, and there were lane restrictions throughout the evening as emergency vehicles were brought in to assist.

Weber Fire District updated on Twitter at 4 p.m. Tuesday the fire is now 70 percent contained, but has burned 52 acres.

A total of 90 personnel, two hot-shot crews, and three helicopters are on the scene, but crews will be off the mountain by 9 p.m. and the Forest Service will be assuming command Wednesday morning. An estimated 70 personnel will be on scene tomorrow with smaller helicopters.

Investigators were also on scene Tuesday determining the origin and cause of the fire. 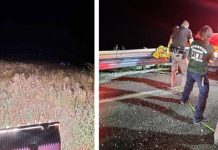