The protests come amid stalled contract talks between the company and its pilots, who say they are working longer hours despite countless flight cancellations across the country.

Thousands of flights have been canceled and tens of thousands of people have been delayed because of staffing shortages amid a resurgence in air travel.

Delta pilots are continuing to work under their last collective labor agreement, signed in 2016, and say they are due better compensation, especially given the way the aviation industry is rebounding from the COVID-19 pandemic.

“Delta pilots were frontline leaders during COVID and the recovery. We have helped our airline recover by flying record amounts of overtime and spending more time away from our families than ever before to get our customers safely to their destinations,” Delta ALPA Master Executive Council chair Capt. Jason Ambrosi said in a statement.

“It’s time for management to recognize our contributions. If Delta can invest billions in foreign airlines and its subsidiaries, it must invest similarly in its pilots.

The two sides suspended negotiations in January under the auspices of the National Mediation Board.

In addition to pay and retirement issues, the union is also demanding changes to pilot schedules which it says are partly to blame for ongoing flight disruptions.

“The perfect storm is occurring. Demand is back, and pilots are flying record amounts of overtime but we are still seeing management cancelling, leaving our customers stranded and their holiday plans ruined. Unfortunately, this mismanagement continues. And it extends to a complete lack of urgency to resolve our issues at the negotiating table,” said Ambrosi. 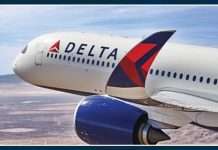