DAVIS COUNTY, Utah, Sept. 23, 2020 (Gephardt Daily) — A man was booked into the Davis County Jail after police say he attempted to murder his mother.

Jason Raoul Solis, 34, is charged on suspicion of:

Solis is being held without bail.

A statement from a detective of the Davis County Sheriff’s Office says at about 1 p.m. on Saturday, he responded to a domestic violence report that “the defendant had tried to kill his mother by placing a plastic bag over her head and choking her neck with his arm.”

The defendant had left the area and had not been apprehended. Three juvenile grandchildren of the victim had been in the home at the time and had witnessed the attack on their grandmother, the probable cause statement says. The victim was taken to the hospital where she was medically evaluated and later released.

“I traveled to the hospital and spoke to the victim,” the detective’s statement says. “The victim reported that the defendant was her son and identified him by name.”

She reported that her son, Solis, had stopped by earlier in the morning and had been behaving normally, and they had breakfast, which she had prepared.

“The victim reported no arguing nor confrontation with the defendant,” the detective’s statement says. “At one point, the defendant arose from where he had been sitting eating breakfast, grabbed a plastic grocery bag from nearby, and put the bag over the victim’s head and face. He held it there tightly to the point that the victim could not breath.”

The woman struggled, and tried to hit and kick the suspect, who was standing behind her, the statement says.

“The victim could no longer obtain sufficient breath, so she stopped fighting with the defendant and concentrated on ripping the bag from her face to gather air. She was able to make a hole in the plastic bag and was able to breath with some difficulty,” the probable cause statement says.

“During this time, the defendant placed his arm around her neck and squeezed his arm causing severe pain and a lack of breath to the victim. The victim later had visible bruising on the top portion of her chest and on her back from the altercation.”

While the woman was being choked, two of her grandchildren “grabbed implements and began striking the defendant and yelling at him to leave the victim alone,” the statement said.

When that was unsuccessful, one grandchild reportedly grabbed a knife.

The defendant ran from the trailer and headed to where his car was parked, the statement says.

The children saw the defendant retrieve a silver handgun from his car and return to the front of the trailer, the statement says. The defendant then banged on the front and rear doors “in an attempt to gain entry back inside the trailer.”

The man did not reside at or own the trailer, the statement said.

“While the children were barricading the doors, the victim pushed out the screen from a window and called to a neighbor for help. The victim indicated to the neighbor that they needed to call the police as her son was trying to kill her.”

The defendant, unable to get back into the trailer, left the area in the vehicle he had arrived in, the statement says.

A phone in Solis’ possession was pinged and found to be near a motel in Riverdale. Family members confirmed that the suspect owned a gun. Layton and Roy police officers observed Solis in a vehicle matching the description of his car.

Solis confirmed to officers he had a gun, the probable cause statement says, and he was taken into custody without incident. A meth pipe was found in the car, charging documents say. 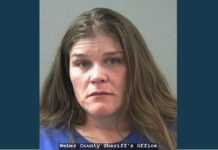