SALT LAKE CITY, Utah, Sept. 26, 2017 (Gephardt Daily) — The patient at the center of a controversial arrest involving a Utah nurse this summer has died, officials said.

Reserve Officer William “Bill” Gray died Monday night after spending the last two months in the Burn Unit at the University of Utah Hospital, following a fatal accident in Cache County, the Rigby Police Department in Idaho said in a news release on Facebook.

Gray was driving a large commercial truck when he was struck by a suspect fleeing police at a high rate of speed. The suspect died in the crash. The collision caused an explosion, and Gray was flown to the University Hospital, in Salt Lake City, with burns covering 46 percent of his body.

SLCPD Detective Jeff Payne came to the University Hospital burn unit to get a blood sample from Gray, who was unconscious.

Nurse Alex Wubbels informed Payne of a list of requirements, any one of which had to be met before she could legally turn over the blood. Options included patient consent, an arrest warrant or a search warrant.

Payne conferred by phone or radio with his watch commander, then took Wubbels under his physical control, handcuffed her, and forced her into his squad car as she screamed, arguing that she had done nothing wrong.

Wubbels was released later, with no formal charges filed.

A second investigation, by a civilian review board, also judged the officers to have violated the policies, Biskupski said.

The violations focus on areas including conduct unbecoming by a police employee, courtesy in public context, a law enforcement code of ethics, a city policy regarding standards of conduct for employees, and a policy regarding arrests, misdemeanor citations and situations requiring a report.

Biskupski and SLCPD Chief Mike Brown both said on Aug. 31 that they were unaware of the incident until the video was released and went viral. Payne and his watch commander, Lt. James Tracy, were both put on administrative leave the following day.

The video has been an international embarrassment to Salt Lake City, with negative reactions to the SLCPD officers’ action coming in from health professionals around the world, from Utah Gov. Gary Herbert’s office, and from the general public, including viewers of talk shows that focused on the incident.

Payne and Tracy have 20 days to respond to the findings that they violated policies, Biskupsi said, then the investigation findings will be turned over to Brown, who will decide the two men’s employment future with the SLCPD.

A criminal investigation in the case is ongoing.

Wubbels has not ruled out her own lawsuit against the officers, she has said.

On Monday, the Salt Lake City Police Association stated the officers under investigation have been unfairly made into outcasts following the “premature release” of the footage.

The full post about Gray from the Rigby Police Department says:

Some sad news has come across to us tonight, and we wish to say a few words about it.

A couple months ago, Reserve Officer Gray was involved in a horrible accident. A suspect was fleeing from Utah State Patrol Officers when he swerved into Bill, who was driving truck for his full-time job. Bill was burnt on 46 percent of his body. Since the event he has been at the University of Utah burn unit, where he has received the best and most skillful care available. He has been in a long hard fight. Tonight, his body lost this fight. We would like to offer our condolences to his wife, April, and their loved ones.

We say “body” because his spirit will live on with all of us. Bill was truly the best of mankind. Always willing to help, always willing to go the extra mile. Bill was a big man, with a bigger heart. Everything about him was generous and kind.

This past winter was a particularly heavy winter here in Idaho. One day, Bill came to the office for a visit. I approached him with a need that the community had. A stretch of sidewalk in the city had not been cleared in some time and the snow build up made it so students walking to the school would bypass the sidewalk and walk in the street; creating a potentially dangerous situation. Without hesitation, Bill got on his personal ATV, equipped with a plow blade, and cleared approximately a quarter mile of snowed in sidewalk. This saved those kids from having to walk a dangerous path.

This was the kind of man Bill Gray was. A man of selfless service. He was a man of kindness and heart, a man of dedication to not only his family but those in his community
Bill always had a funny story to bring about a laugh. He always did the good thing. This world would be better off with more Bill Grays, and this world is truly darker without his light.

Let us all remember Bill, and let us live by his example so that we too may brighten the lives of those we come in contact with.

We Love You Bill. Rest easy. You will be sorely missed on the watch.

A GoFundMe page has been set up to assist the family of Gray. 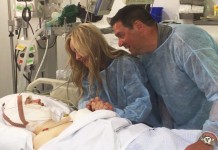 Parents Of Two Utah LDS Missionaries To Speak At 11 a.m.