PROVIDENCE, Utah, Sept. 26, 2016 (Gephardt Daily) — A Logan mother who was in very critical condition for three days following the traffic accident that killed her 3-month-old son has died.

Norma Barriga, 26, was taken off life support on Sunday, and died a short time later. Barriga and her infant son, Andy, were traveling in Providence at about 5 p.m. Thursday when their Hyundai was struck by a Dodge pickup truck.

The Hyundai turned left, in front of the pickup, and was struck on the passenger side. The Hyundai was pushed into another vehicle waiting at the intersection.

The pickup rolled into the southbound shoulder. The driver of the pickup, a 23-year-old pregnant woman, suffered broken bones and cuts. She was transported to a local hospital.

Andy Barriga, was flown to Primary Children’s in critical condition and died Friday from his injuries. His mother, Norma Barriga was transported to a local hospital, then flown to Ogden’s McKay-Dee Hospital, where she remained until her death. 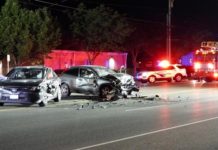