ROY, Utah, Jan. 12, 2022 (Gephardt Daily) — A suspect has been arrested and booked into jail Wednesday after an intensive investigation into the October 2016 death of a toddler in Roy.

In October 2016, Roy City Police officers were dispatched to a home in the area of 5000 South 3100 West to assist the Roy Fire/EMS Department during a medical call involving the unconscious child.

The 22-month-old girl was transported to a local hospital, then flown by medical helicopter to a Salt Lake City area hospital. She died the next day.

A subsequent search warrant affidavit stated that the child succumbed after “non-accidental trauma.”

She suffered serious brain injury, bite marks on her cheeks, and bruises on her neck that appear to be the result of strangulation, the affidavit said.

“At the time of the initial investigation there was not enough evidence for criminal charges,” the latest Roy Police news release says. “The Roy City Police Department Investigations unit worked tirelessly and were able to establish probable cause for the arrest of Jordan Sasaki for the Aggravated Murder of Genesis.”

Sasaki has been booked, on a no-bail hold, into Weber County Correctional Facility where he is charged with one count of aggravated murder and one count of obstruction of justice. 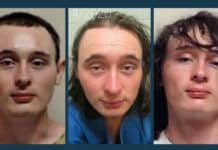