Sgt. Terry Fritz, with the North Salt Lake Police Department, told Gephardt Daily a tow truck with an unoccupied vehicle on its flatbed failed to make a turn and rolled.

The driver of the truck had to be extricated and was flown to the hospital in critical condition by AirMed helicopter.

The passenger in the tow truck was ejected and was transported in critical but stable condition to U of U Hospital by ground ambulance.

Sgt. Fritz said later Saturday that no update was available on either man’s condition.

It appears that speed was definitely a factor in the crash, but the incident is still under investigation and it isn’t known if a mechanical problem may have been involved, Fritz said.

Part of Eagleridge Drive, east of Orchard and Parkview, was closed to traffic while the scene was investigated and then cleared. 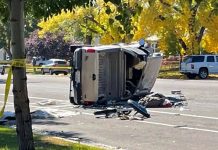 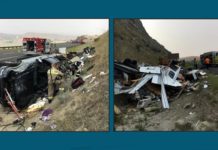