HILDALE, Utah, Aug. 7, 2018 (Gephardt Daily) — Officials have identified a 19-year-old man who was electrocuted Saturday afternoon after he scaled the fence of a power substation yard in Hildale and climbed on top of a transformer box.

The deceased is Kyle Barlow, of Hildale, according to Hildale-Colorado City Fire Department officials.

Fire Chief Kevin J. Barlow said in a news release that the incident occurred at approximately 2:25 p.m. on North Box Elder Street, with Hildale and Colorado City emergency units responding to a report of an electrocution.

“Upon arrival, police and fire units found that a 19-year-old autistic male had somehow scaled the fence of a power substation yard,” the news release said. “He climbed on top of a large transformer box and made contact with high voltage wires and was instantly electrocuted.”

“For safety reasons, rescue crews were forced to wait until all lines were de-energized and confirmed to be grounded,” the statement said.

Barlow was pronounced dead at the scene.

“The young man has severe autism and is known to have no fear of heights or danger,” the news release said. “He has scaled tall fences, climbed onto roofs, and climbed tall trees. His mother had stopped at a nearby business for a few minutes and he was gone from the vehicle when she returned. She called for assistance and soon found him within the fenced-in substation yard. Within seconds he had climbed the transformer.”

The electricity was off to both Hildale and Colorado City residents for about two hours while the investigation was conducted. 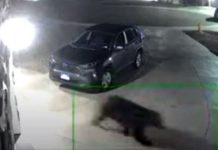