SUMMIT COUNTY, Utah, July 26, 2021 (Gephardt Daily) — Officials have identified a 6-year-old girl who died Wednesday after a crash on Interstate 80 in Summit County.

“At approximately 5:57 p.m., a 2005 Chevy Tahoe was traveling eastbound on I-80 in the area of milepost 190, about six miles from the Wyoming state line,” said a previous statement from UHP. “There were six occupants in the Tahoe, ranging in age from 42 to 6 years old. The driver of the Tahoe told troopers that they fell asleep.”

As the roadway curved to the right, the Tahoe left the roadway to the left and entered the median. The driver overcorrected, causing the vehicle to roll multiple times, the statement said.

Three of the occupants of the vehicle were unrestrained, and received serious injuries as a result of the crash. One of the unrestrained occupants, the 6-year-old girl, was transported by ambulance to the hospital where she was pronounced deceased.

One occupant was flown by helicopter to a Salt Lake area hospital. 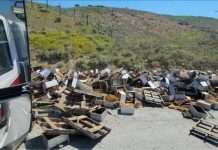