The statement from the 5th District Court of St. George said Jason Shawn Reveal, 45, of St. George, is in custody and facing charges of attempted murder, a first-degree felony; aggravated burglary, a first-degree felony; two counts of domestic violence in the presence of a child, a class B misdemeanor; and criminal mischief, a class B misdemeanor.

Officers began to render aid to the stabbing victim until medical units arrived, the news release said. The victim was then transported to Dixie Regional Medical Center in St. George in critical condition.

The probable cause statement said a 911 call was made from the address in Harvest Lane.

“When officers arrived, they came in contact with the suspect, Jason Reveal, at the front door of the residence,” the statement said. “Jason had blood on his hands and was holding a small pocket knife. After Jason was detained he asked for officers to kill him and the officers told him they were not going to kill him. Jason asked why and stated that he had killed him, referring to the male victim (victim one) inside the residence.”

Reveal, several witnesses and the victims, were interviewed.

“All parties stated that Jason and victim two have been separated since March of 2019,” the statement said. “Victim two and Jason have several children together. Two of their children were sleeping in victim two’s home at the time of the incident. Victim two has a new boyfriend that was at her residence that night.”

Reveal arrived at victim two’s residence and pounded on the front door, the statement said. He then broke the front door frame, causing the door to open, and entered the residence.

There were two juveniles in the residence at the time of the incident, the statement said. Both juveniles woke up during the altercation. One juvenile hid in their closet out of fear for their safety. The other juvenile stated that they could not move because they were paralyzed with fear. Neither juvenile witnessed the incident, but did hear what was occurring in the master bedroom.

The woman who is referred to as victim two was not injured, the probable cause statement said.

The felony was committed while Reveal was out on probation or parole, the statement said. He was transported to Washington County Jail with no bail. 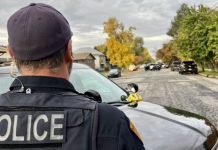