Also, because the invasive fish were placed in Utah Lake illegally, anglers must kill any Northern pike they catch that don’t have a tag, a Utah DWR statement says.

“DWR biologists started tagging some of the Northern pike in Utah Lake and its tributaries in February 2020 as part of a study to learn more about the seasonal locations and movements of juvenile and adult pike in Utah Lake, the Provo River and Hobble Creek,” the news release says. “The study will run for at least five years.”

Since Northern pike typically spawn when the ice begins to melt, anglers may catch more of the invasive fish at Utah Lake this time of year.

The tagged Northern pike have thin, red pieces of plastic attached to them, the Utah DWR statement says. The tagged fish also have transmitters implanted in them so biologists can track them using Global Positioning System technology.

“We are asking anglers to release pike that have these tags because the transmitters that are in the fish enable us to track their movements,” said DWR Central Region Native Aquatics Biologist Keith Lawrence. “Tracking their movements will help us develop a monitoring and control program in the future.”

If you catch a tagged Northern pike in Utah Lake or one of its tributaries, please do the following:

As in the past, if you catch a pike that doesn’t have a tag, you must remove the fish from the water and kill it, the statement says.

“In that case, we request that you either bring the fish to the DWR office in Springville, if possible, or that you freeze it and call the DWR so arrangements can be made to pick up the fish,” Lawrence said. “If a tagged pike inadvertently dies, we would still like to recover the fish in case the transmitter can be reused.”

Northern pike were illegally introduced to Utah Lake around 2010. Due to their ability to rapidly reproduce and their predatory nature, DWR biologists are worried about the effect pike will have on other fish species in the lake, especially June suckers.

June suckers, which are found only in Utah Lake, were recently downlisted from endangered to threatened. Their continued recovery and eventual delisting could be jeopardized if the number of pike in the lake expands.

“Northern pike can do great harm, both to the endangered June sucker and to some of the sportfish species in Utah Lake,” Lawrence said. “For that reason, we are asking anglers to assist us when they catch these fish by notifying us when they catch a tagged one, and, if possible, providing untagged fish to us for diet analysis. That information will be extremely helpful in our efforts to document the impact of the pike and control their spread.” 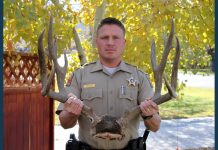 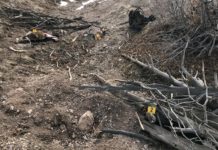 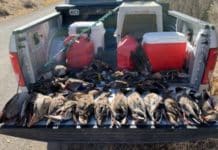