According to a news release from the Utah County Sheriff’s Office, at about 7:30 p.m., narcotics investigators with the UCSO and Spanish Fork Police Department were at the Love’s Truck Stop on State Route 77, west of Interstate 15 in Springville.

They saw a man get into a car at that location with a woman. They then saw the woman conduct what they believed to be a hand-to-hand drug transaction.

When the woman left the truck stop, the officers followed her westbound on SR-77 into Utah County. Investigators saw an equipment violation and saw the woman driving erratically, the release states. They turned on their emergency lights, and the woman refused to yield. She led them on a low-speed pursuit for about a mile before they were able to box her in and get her to stop.

According to the sheriff’s office, when officers made contact with the driver, Sadie Shantell Leavitt, 25, of West Valley City, they discovered she had her three small children with her, a 4-year-old boy, 3-year-old girl, and a 4-month-old girl. None of the children were properly restrained in the car.

When officers searched Leavitt’s car, the release states, they found more than an ounce of methamphetamine and items of drug paraphernalia, including a small set of scales used to weigh the drugs she was selling. She also had a suspended driver license.

At the jail, according to the release, officers discovered Leavitt had nearly 2.5 ounces of heroin concealed on her. She tried to hide that heroin in the police car. The street value of the drugs found in Leavitt’s possession is more than $10,000.

Officers booked Leavitt into jail on three second-degree felony charges of endangerment of a child, third-degree felony evading police, class A misdemeanor possession of drug paraphernalia in a drug-free zone, and class B misdemeanor DUI, in addition to the first-degree felony distribution charges.

Leavitt was also booked for equipment, seat belt, and moving violations. She was also found to have several warrants for her arrest.

The local office of the Division of Child and Family Services was contacted and Leavitt’s children were released into the custody of her grandmother. 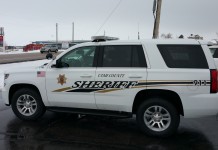