TOOELE COUNTY, Utah, March 2, 2019 (Gephardt Daily) — A 37-year-old woman was killed Saturday afternoon when a boulder fell on her as she hiked on Stansbury Island near the Great Salt Lake.

Lt. Travis Scharmann, of the Tooele County Sheriff’s Department, said the first call was received by dispatch at about 2:45 p.m., reporting that the woman was trapped under a boulder.

She had been hiking with her husband and a friend, Scharmann said, when she stepped on a loose boulder and fell, with the rock coming down on top of her.

He said the victim is from the Salt Lake City area, but her name is not being released while family members are still being notified.

Four people were unable to move the roughly 4 foot-by-4 foot rock, which probably weighed about a ton, and equipment had to be brought in to lift it, Scharmann said. The operation took several hours because of the steep terrain and snow.

The body will be transferred to the Office of the Medical Examiner in accordance with protocol. 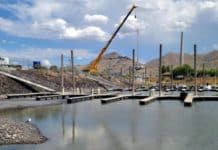