SACRAMENTO, March 23 (UPI) — A proposal to raise California’s minimum wage to $15 per hour by 2021 will be on the 2016 ballot in November, election officials said.

Sponsors of the “Fair Wage Act of 2016” presented sufficient voter signatures to put the measure to a vote, the state’s Secretary of State’s Office announced Tuesday. Under the proposal, California’s minimum wage of $10 per hour, since the start of the year, would increase by $1 dollar each year, to $15 per hour by 2021, with automatic increases afterward in line with the cost of living. Statewide polls show support for the new minimum wage increase, as well as for future increases.

The proposal was sponsored by the Service Employees International Union United Healthcare Workers West. Supporters raised $4.7 million to promote it, largely from the union.

A competing proposal promoted by California’s largest labor union, the Service Employees International Union, could also be on the November ballot if enough signatures are gathered. It calls for a ceiling of $15 per hour for the minimum wage by 2020, with six guaranteed paid sick days per year. Some advocates fear the competing plans could cause voters to reject both. An alternative approach involving legislation to raise the minimum wage, which would render a ballot initiative moot, could also be decided prior to June 30.

Eight ballot initiatives have thus far qualified to be voted on in California in November, including proposals to ban plastic bags in the state and a requirement for condom use in pornography films. 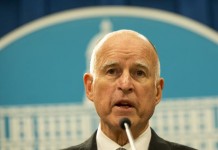