Nov. 7 (UPI) — The U.S. Air Force ordered a full review of its procedures after revealing Monday it failed to enter a domestic violence conviction for a man who killed 26 people at a Texas church into the federal background check database.

A representative for Academy Sports and Outdoors said Devin Patrick Kelley purchased two of his firearms at one of the stores in San Antonio. In a statement, the representative said that for both purchases — one in 2016 and one in 2017 — Kelley passed background checks through the National Instant Criminal Background Check system.

Later in the day, the Air Force said he passed the background check because the military never entered his conviction.

Kelley was discharged from the U.S. Air Force for bad conduct after he was convicted in 2012 of assaulting his former wife and their child. He served one year in military prison.

Under federal law, though, his assault conviction prevented him from legally possessing firearms — a fact the Air Force confirmed Monday. Federal law also bans anyone who served a prison term longer than one year from owning a firearm.

“The Air Force has launched a review of how the service handled the criminal records of former Airman Devin P. Kelley following his 2012 domestic violence conviction,” the Air Force said in a statement. “Federal law prohibited him from buying or possessing firearms after this conviction.”

Retired Col. Don Christensen, the chief prosecutor for the Air Force during Kelley’s court-martial, told NPR his case was serious.

“He fractured his baby stepson’s skull,” he said.

Though Kelley didn’t have a license to carry a weapon in Texas, Freeman Martin of the Texas Department of Public Safety said there was nothing in the federal background check stopping him from obtaining one.

“There were no disqualifiers entered into the database that would preclude him from getting the license,” he said. “The databases were checked, and he was cleared.”

Kelley also bought two guns in Colorado — one in 2014 and one in 2015. Authorities found three firearms in his vehicle after the shooting, including a Ruger 556 semi-automatic rifle, a Glock 9-mm handgun and a Ruger .22 caliber handgun.

Investigators said at a news conference Monday that domestic issues may have been the motivation behind the shooting. Kelley’s mother-in-law attended the First Baptist Church in Sutherland Springs and received “threatening texts from him.”

Officials said Kelley “expressed anger” toward his mother-in-law and the attack was not racially or religiously motivated. Kelley’s in-laws were inside the church during the shooting.

Investigators said 14 of those killed were children, including the 14-year-old daughter of the pastor.

“Wherever you walked in the church, it was death,” Wilson County Sheriff Joe Tackitt said.

Officials said Kelley tried to leave the scene when a witness attempted to grab his weapon — a Ruger AR-556 assault-style rifle. Kelley then led a civilian on a car chase.

“I never in a million years could have believed Devin could be capable of this kind of thing,” Dave Ivey, Kelley’s uncle, said. “My family will suffer because of his coward actions.”

Kelley lived with his parents on property they own in New Braunfels, Texas, about 35 miles north of Sutherland Springs. Neighbors of the Kelley family said they sometimes heard gunfire at night, yet some still said it was “shocking” to hear of the shooting.

“You never think your neighbor is capable of something like that,” Mark Moravitz said. “If he did that, that kind of worries you, thinking we’ve been living next door to the guy.”

President Donald Trump, who is on a 12-day trip to Asia, spoke from Japan about the shooting during an appearance with Japanese Prime Minister Shinzo Abe.

“I think that mental health is a problem here. Based on preliminary reports, this was a very deranged individual with a lot of problems over a very long period of time,” Trump said.

The president also said gun ownership was not a factor the attack.

“We have a lot of mental health problems in our country, as do other countries, but this isn’t a guns situation … we could go into it but it’s a little bit soon to go into it,” Trump said. “Fortunately, somebody else had a gun that was shooting in the opposite direction, otherwise, it wouldn’t have been as bad as it was, it would have been much worse.”

Investigators said surveillance video was recovered from inside the church and will be used in the investigation which “may go on for days.” 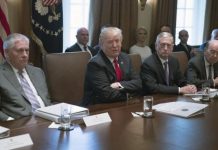 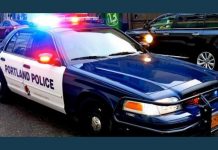 Portland police will no longer classify people as gang members