Dec. 22 (UPI) — Apple has said older iPhones have been slowed down deliberately to offset problems with its lithium ion battery.

The tech giant made the announcement Wednesday after a report two days earlier from Primate Labs, the company behind the Geekbench processor benchmarking software, explained the slowdown. John Poole, founder of the organization, posted on a blog that processors in iPhones slow down and decrease in performance as batteries age and lose capacity.

The phones could even shut down if they don’t get enough battery power.

To deal with the problem, Apple’s iOS software updates, starting with last year’s iOS 10.2.1, included better power management capabilities. The operating system slows down the device to prevent it from shutting down in cold temperature, a low battery charge or very old batteries.

“Our goal is to deliver the best experience for customers, which includes overall performance and prolonging the life of their devices,” Apple said in a statement. “Lithium-ion batteries become less capable of supplying peak current demands when in cold conditions, have a low battery charge or as they age over time, which can result in the device unexpectedly shutting down to protect its electronic components.”

Apple says the batteries are designed to retain up to 80 percent of its original capacity at 500 complete charges.

“All rechargeable batteries have a limited lifespan and may eventually need to be serviced or recycled,” Apple wrote on its website. Your own battery’s lifespan will vary depending on how you use your device as well as the settings you choose for it.”

Apple charges $79 to replace the battery of an iPhone not covered by a warranty.

Some users and observers have criticized Apple over the issue, with some saying it can potentially damage the phone maker’s reputation. 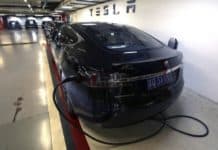