Feb. 17 (UPI) — President Joe Biden said he expects the COVID-19 vaccine to be widely available in the United States by the end of July and cautiously suggested the nation may return to “normal” by Christmas.

Answering questions during a one-hour CNN Town Hall in Milwaukee on Tuesday, Biden said the administration would reach 600 million available doses by the end of July, “enough to vaccinate every single American.” He added, however, that they may not be distributed at that time.

Biden said one of the most significant obstacles he faced in taking on the pandemic response from the previous administration was a lack of vaccinators to administer the shots.

“Now we have made significant strides increasing the number of vaccinators. I issued an executive order allowing former retired docs and nurses to do it. We have over a thousand military personnel … We have gotten the National Guard engaged … Plus we have opened up a considerable amount of locations where you can get the vaccine,” he said.

Biden’s comments came as White House Press Secretary Jen Psaki said the administration will increase the vaccine supply to states to 13.5 million doses per week, up from 11 million last week.

The president also noted that current vaccinations and potential clearance for Johnson & Johnson’s COVID-19 vaccine will cause the spread of the virus “to diminish considerably” and that the country could move toward normalcy next Christmas.

“So if that works that way, as my mother would say with the grace of God and the goodwill of the neighbors, that by next Christmas I think we’ll be in a very different circumstance, God willing, than we are today,” he said.

In a clarification to comments made by Psaki, Biden said there was a “mistake in communication” when it was reported that a school could be considered open if it was open just one day per week.

“I said opening the majority of schools in K through 8th grade because they’re the easiest to open, the most needed to be open in terms of the impact on children and families having to stay home,” he said.

Additionally, Biden suggested that some schools may open during the summer in what would act as another semester, while adding that states should move teachers ahead in line to receive the COVID-19 vaccine. 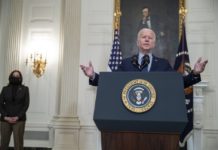