The 10-year treasury yield traded slightly higher on Monday at around 1.48%, after rising to 1.56% last week.

Facebook stock plummeted 4.89% as the social network and its Instagram and WhatsApp platforms experienced outages Monday. The company also took a hit after a whistleblower accused the company of a “betrayal of democracy” by a whistleblower in an interview on Sunday.

Shares of Tesla rose 0.81% after the company announced it exceeded analysts’ estimates by delivering 241,300 electric vehicles during the third quarter.

Merck stock gained 2.09% as the company announced on Friday that it wasseeking an emergency use authorization from the Food and Drug Administration for its antiviral COVID-19 drug.

Vaccine makers saw shares fall Monday with Moderna dropping 4.47%, Pfizer declining 1.19% and Johnson & Johnson sliding 0.68% despite Dr. Anthony Fauci on Sunday saying the Merck drug should not be a replacement for getting vaccinated.

Markets are looking to rebound from a difficult September, which saw the S&P 500 fall 4.8% for the month, while the Nasdaq Composite dropped 4.3% and the Dow declined 5.3%. 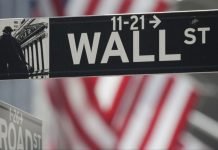 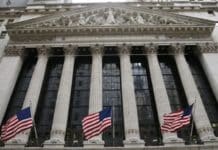