Lebanese Health Minister Hamad Hassan said the blasts killed at least 50 people and injured more than 2,500. The Lebanese Red Cross said those numbers are likely to increase as the dust settles.

Authorities said a warehouse where firecrackers were stored near Beirut’s port was the source of the explosion after a fire started inside the building. The cause of the fire was under investigation.

The secondary blast was larger, creating a shockwave that pushed through the city for a radius of miles, blowing out windows in its path. Lebanon’s state-run National News Agency said the presidential palace sustained damage to windows and doors, though no one there was injured.

RELATED Lebanon’s foreign minister resigns, says country could become ‘failed state’
The Lebanese Red Cross said it dispatched every ambulance from throughout the region to the capital city to assist the injured. The New York Times reported that at least one hospital was overwhelmed and turning away patients.

The headquarters of former Prime Minister Saad Hariri was also damaged in the explosion.

Ghada Alsharif, a reporter for the Daily Star, shared a video online of the newspaper’s heavily damaged office. Alsharif called the explosion “massive.” Homes as far as 6 miles away suffered damage from the blast. The force from the blast even flipped over some vehicles on streets.

“What I felt was that it was an earthquake,” resident Rania Masri told CNN. “The apartment shook horizontally and all of a sudden it felt like an explosion and the windows and doors burst open. The glass just broke. So many homes were damaged or destroyed.” 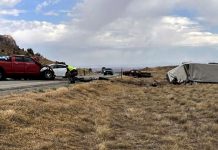