Aug. 19 (UPI) — One tropical feature is forecast to develop and hug the west coast of Mexico, while a second tropical feature may form and eventually pass close to Hawaii in the coming days.

An area of disturbed weather located about 125 miles south of Tapachula, Mexico, with associated showers and thunderstorms is forecast to develop into a tropical storm and then a hurricane later this week.

“We expect this near-coast feature to parallel the western coast of Mexico this week,” AccuWeather hurricane expert Dan Kottlowski said.

“Whether it makes landfall along the Mexico coast at some point is highly uncertain; all interests along the coast are encouraged to monitor the movement of this evolving tropical feature,” Kottlowski said.

Even in lieu of landfall, as the system becomes stronger, winds and seas will build along part of the west coast of Mexico, while rain and thunderstorms also brush the coast as the week progresses.

During next week, the feature may travel northwestward and parallel Mexico’s Baja Peninsula for a time. However, as this storm enters colder waters in this region of the Pacific, it is likely to diminish long before reaching waters off the coast of California.

Farther west over the Pacific Ocean, another area of disturbed weather was located 900 miles southwest of the southern tip of Baja California, Mexico.

This feature has a 70 percent chance of developing into a tropical depression or storm over the next five days.

It is possible this feature brings an eventual uptick in showers and thunderstorms as well as building surf to Hawaii early next week.

“This system may pass near the Hawaiian islands around Sunday or Monday,” Kottlowski said. “However, until this system becomes better organized, the future intensity, speed and movement remains uncertain.”

Tropical systems that strengthen and maintain strength are more likely to take a more northwest path, which could bring such a feature close to Hawaii.

On the other hand, tropical systems that remain weak or weaken while moving along are more likely to take a more westerly path. 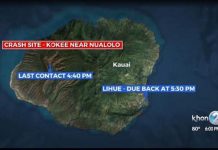