July 30 (UPI) — The entire police department in Southport, N.C., has been “functionally closed” after the arrest of its police chief and second-in-command following an FBI investigation.

Southport Police Department Chief Gary Lee Smith, 46, and Lt. Michael Christian Simmons, 48, were both charged with conspiracy to obtain property by false pretenses, willful failure to discharge duties, and obstruction of justice, the Port City Daily reported. The two men are suspected of working a trucking job while they claimed to be on the clock for police work.

“The joint investigation revealed Smith and Simmons were reporting for work at a local trucking company where they were completing overnight shifts during the same hours they had claimed on their daily activity reports to be working at the Southport Police Department,” North Carolina’s State Bureau of Investigation said in a press release. “Multiple search warrants were conducted today at the police department, town hall and the trucking company.”

District Attorney Jon David said the trucking jobs required Smith and Simmons to be out of town for extended periods of time. It’s not clear how long the two officers are suspected of running the scheme, but officials said the investigation began in April after other officers called authorities to complain.

With the top two officers facing charges, the Brunswick County Sheriff’s Office took over policing duties in the town. The rest of the SPD — about nine officers — have been put on paid leave.

During a press conference, David said the other officers are not necessarily part of the investigation.

“A lot of these officers have done absolutely nothing wrong. Some of them are the ones that first came forward,” David said, according to WECT-TV. “This stain should not be extended to the officers who take seriously their duty to serve and protect.” 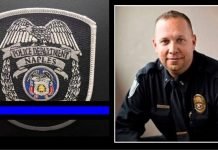