McCandless, who died Thursday, became the first astronaut to fly in space without being harnessed to a space vessel on Feb. 7, 1984, while on a mission aboard the space shuttle Challenger. Other astronauts on the mission used a 70mm camera to capture the moment in a now-iconic photograph, NASA said in a release.

“I don’t like those overused lines ‘slipped the surly bonds of Earth’, but when I was free from the shuttle, they felt accurate,” McCandless wrote in an article for The Guardian in July 2015. “It was a wonderful feeling, a mix of personal elation and professional pride: it had taken many years to get to that point.”

NASA chose McCandless as an astronaut in 1966. He previously served as a captain in the U.S. Navy and went on to take part as the Mission Control Communicator during the Apollo 11 mission that brought Neil Armstrong and Buzz Aldrin to the moon in 1969. McCandless also served in the 1990 mission aboard the space shuttle Discovery that launched the Hubble Space Telescope.

He finished his NASA career with more than 312 hours in space. 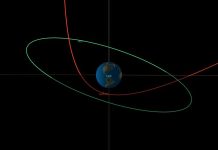