Peek said Atlanta City police were called to the area Saturday night in response to a report of someone being shot and police found three people with gunshot wounds when they arrived at the scene at around 10 p.m. on Saturday.

Police later determined that two more people had taken themselves to a nearby hospital.

The two were believed to have taken a vehicle at gunpoint from a valet in the area to drive to the hospital, Peek said.

The motive for the shooting “has not been established at this particular point in time” but Peek said it was the result of “some type of altercation.”

Three weapons and the stolen vehicle were recovered from the scene and Peek added that several scooters were also found after 911 had received calls about juveniles on scooters in the area “that very well could have been shooting.”

Peek said it was not immediately clear whether the calls about the scooters were related to the shooting but said it would be part of the investigation into the incident. 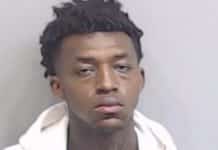