Feb. 4 (UPI) — Alonso David, former president of the Human Rights Campaign, filed a lawsuit on Thursday alleging the organization has a “racist, biased culture” and fired him because he is Black.

In the lawsuit, filed in the Eastern District of New York, David said he was paid less and ultimately terminated “because he is Black,” citing instances in which he was told not to mention his race in public comments and asserting the HRC — the largest LGBTQ advocacy group in the United States — has a “deserved reputation for unequal treatment of its non-white employees.”

“Today, I am filing a lawsuit for the millions of Black and Brown people who face discrimination every day but fear retaliation or lack the resources to challenge it,” David wrote on Twitter.

The HRC and the HRC Foundation Boards of Directors separately voted in September to terminate David “for cause, effective immediately,” for violating his contract after a report by New York Attorney General Letitia James found he helped former Gov. Andrew Cuomo to discredit sexual assault allegations against him by former aide Lindsey Boylan.

In the suit, David states he and HRC agreed that an outside investigation should be conducted to determine whether he had “done anything improper.”

After meeting with investigator Sidley Austin and answering questions for more than 10 hours, David said he was contacted and told to resign by 8 a.m. the following morning. David said he refused to resign as the organization “could not even articulate what it was accusing him of doing wrong,” and alleged HRC “retaliated against” him by firing him.

During his time at HRC, board members “acknowledged” during discussions about the renewal of his contract in May 2021 that David was initially paid less than his White predecessor because he was Black, the lawsuit alleges.

David also alleged he was repeatedly discouraged from discussing race in public, including being confronted by a “prominent” White board member in front of other HRC staffers after giving a speech on race.

“We all know you’re Black, why do you keep telling us that?” the board member allegedly said.

In the wake of protests sparked by the police killing of George Floyd, the suit says a senior executive criticized David for issuing a statement in support of the Black Lives Matter movement on HRC’s behalf, citing concerns about “alienating” White donors, particularly “White gay men.”

The suit also describes an instance in which the same senior executive criticized a Black staff member for meeting with a Black-owned consulting firm without a White person present.

“I just know how it could be when Black people get together like that,” the suit alleges the executive said. “It will be just like all the Black people looking out for each other. I don’t want them to not perform because they think that just because you are Black you are going to bail them out.”

HRC interim president, Joni Madison, issued a statement saying that David’s lawsuit is “riddled with untruths” and that he was fired for his role in assisting Cuomo.

“Mr. David’s actions as detailed in the NY State Attorney General’s report were a painful revelation, particularly because so many members of the LGBTQ+ community are survivors of assault and harassment themselves,” she said. “Moving forward, we will not be distracted and will remain focused on our critical work to bring full equality and liberation to LGBTQ+ people everywhere, especially for the most marginalized people in our community.” 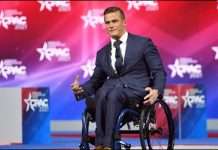 Rep. Cawthorn sues N.C. elections board over effort to exclude him from ballot