ALACHUA, Fla., Sept. 3 (UPI) — A Florida man taking his camera drone out for a spin ended up recording the moment a hawk swooped in to knock his quadcopter out of the sky.

The video, posted to YouTube by user mooosestang, shows the drone’s perspective as it takes off in the man’s yard for an initially uneventful flight.

The drone’s flight turns to disaster when it catches the attention of a territorial hawk and is knocked out of the sky.

“It was bound to happen eventually,” the video’s description reads. “My neighbor came out of nowhere and attacked my quadcopter. He has been very vocal about the noise and violation of his air space. Hawks are fast! Pretty sure he was uninjured. I armed it to keep him from flying off with it and he was standing a few feet back with his wings spread when I got there.”

The man said his drone took some minor damage from the encounter. 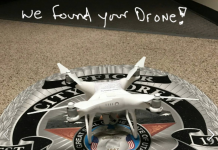