Infighting Sunday and Monday left at least 12 people dead and dozens injured in the southern coastal city of Aden. Houthi rebels forced Hadi to flee the capital of Sanaa in February 2015 for Aden, where his government has been based ever since.

Southern separatists exchanged fire with Hadi’s forces in the districts of Khormaksar and Dar Saad. The separatists — the Southern Transitional Council — seized government buildings, which Hadi called an attempted coup.

Until recently, the separatists supported Hadi in the fight against the Houthi rebels even though the STC previously sought secession from Hadi’s government. Until unification in 1990, South Yemen was its own country, and groups still exist that support a separate country in the south.

Hadi, a southerner who supports unification, formed an alliance with the separatists to fight their common enemy, the Houthis.

Skirmishes broke out, though, after the STC told Hadi he must dismiss Prime Minister Ahmed bin Daghr and his Cabinet. Hadi refused and banned public gatherings in response.

“Rebellions and weapons won’t achieve peace or build a state,” Hadi said Monday. “The real and the main battle is with the Houthis and any other side problems will impact the main battle. Any assault on legitimacy is a coup.”

The recent infighting hasn’t been the only complication to the civil war waging in the country. Saudi Arabia supports Hadi’s government and has led a coalition of eight Arab countries to restore him to power. One of those countries, United Arab Emirates, has ties to the separatists, though.

Battle lines aren’t clear on the other side, either. Infighting between the Houthis and forces loyal to former Yemeni President Ali Abdullah Saleh — once aligned against Hadi — left Saleh dead in December.

When Saleh was still in power, Houthis fought against his government periodically from 2004 until his ouster in 2012. With a common enemy in new President Hadi, the Houthis and Saleh’s supporters joined forces and the conflict exploded in 2014 and 2015. 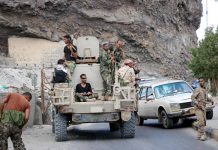 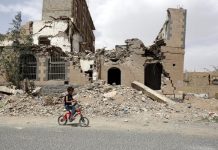