The adult male jaguar escaped its habitat around 7:20 a.m., before the zoo was open to the public. By 8:15 a.m., veterinarians sedated the animal and secured him in his night house.

During his escape, though, he attacked the other animals in their nearby habitats.

“The animal care team is devastated by this tragic loss,” a release from the zoo said. “Today is a difficult day for the Audubon family.”

The zoo closed for the day Saturday, but said it would reopen Sunday.

The zoo was investigating how the jaguar managed to escape his enclosure. 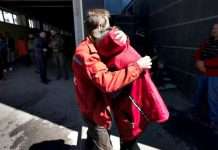