June 25 (UPI) — A man died after falling about 70 feet from a waterfall in North Carolina, an emergency official confirmed.

McDowell County Emergency Services Director William Kehler said a call came in at 4:32 p.m. Saturday about a man who tumbled from the Upper Catawba Falls in the Pisgah National Forest. The area is 30 miles east of Asheville.

Kehler said the man fell in a rough area with steep inclines and multiple hazards for rescuers.

He had life-threatening injuries when emergency crews arrived and was airlifted to Mission Hospital Trauma Center in Asheville at 7:28 p.m. He died later from his injuries.

WHKP-TV reported that Adam Muzic was in his early 20s and had a nearly 1-year-old son.

Kehler could not confirm if the man was alone.

The Pisgah National Forest comprises more than 500,000 acres with whitewater rivers, waterfalls and hundreds of miles of trails. This national forest is the first land purchased under the Weeks Act of 1911, which led to the establishment of national forests in the eastern United States. 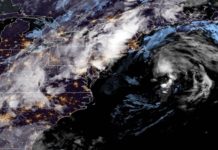