Feb. 24 (UPI) — Nigerian held its presidential election Saturday, hours after gunfire and blasts rocked a northern city, and amid reports of vote-buying at polling stations.

The explosions in the Nigerian city of Maiduguri occurred at a camp for internally displaced refugees at around 5 a.m. local time Saturday, Nigerian Army spokeswoman Onyeama Nwachukwu told CNN. They occurred about three hours before polls were scheduled to open, as President Muhammadu Buhari, 76, seeks a second term.

No deaths or injuries were reported.

“There was an attack this morning at the camp by the militants, but the military has suppressed it at the moment,” Nwachukwu said.

Buhari, of the All Progressives Congress, promised to weed out official corruption when he was elected in 2015, but many have been left disappointed that he has not made as much progress in that area as hoped and angry about the extreme poverty in the country.

With hopes that his top challenger, former Vice President Atikuy Abubakar of the People’s Democratic Party, will improve the economy and create jobs, the election is expected to be close.

Maiduguri has a large population of internally displaced refugees and is often a target of the terrorist group Boko Haram.

Nwachukwu said the army was still assessing the situation from the blast Saturday morning.

The gunfire was “not targeted at members of the public but was for security purpose,” authorities said, calling on voters to turn out in large numbers.

“There’s no attack on any part of Maiduguri and hence no threat to public peace and order,” a police spokesman said, though some questioned why a fear-inducing gunfire drill would be held at the time.

Thousands of internally displaced refugees came out to vote despite the gunfire and blasts.

Voters also reported agents of both parties sought out voters at polling stations and offered money to swing votes their way.

Some voters also complained that there were hours of delays when the logistical challenges should have been ironed out after the election had already been unexpectedly delayed a week. 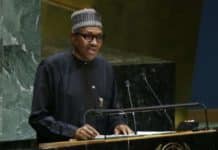