The company reported the average U.S. rig count for October was up 35 from the previous month to 544, while Canada posted a gain of 15 to 156. The previous month also showed gains in North America, though the pace of growth was somewhat greater from September.

Rig numbers serve as a barometer to gauge how confident companies are investing in new exploration and production activity. Oil prices are relatively the same as they were last year and Baker Hughes reported figures for October that were lower than for the same month last year.

Though there’s a lag time between when rig activity could be reflected in production figures, the recovery indicated in Baker Hughes’ data for October suggests North American output could rebound. In terms of confidence, Baker Hughes reports the rig numbers outside of the United States and Canada actually declined modestly.

Crude oil prices recovered to above $50 per barrel in October after members of the Organization of Petroleum Exporting Countries agreed to coordinate on a production ceiling intended to put a floor under the price of oil. Questions have emerged over how well that coordination would work across the 14 member states. Some members want an exemption and Russia, a major producer outside the group, has been fluid on its direction.

Baker Hughes is one of the largest companies providing services to the exploration and production side of the energy sector. This quarter, it took a $429 million net loss. That follows steep reductions in staffing, but marks an improvement over the $911 million loss during the previous quarter.

Last month, GE Oil & Gas took a 62.5 percent in Baker Hughes. The combination gave both sides a win. For Baker Hughes, it touted itself as a “new” company, while GE avoids the costs of a full acquisition. 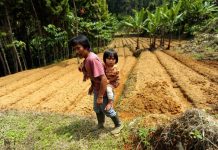