SEOUL, Nov. 10 (UPI) — North Korea is stepping into a dispute between Phnom Penh’s foreign ministry and the United Nations human rights office in Cambodia, after a Cambodian spokesman said the organization is in the country illegally.

Pyongyang’s deputy foreign minister said Thursday the Cambodian division of the U.N.’s Office of the High Commissioner for Human Rights has been operating illegally for nearly a year, according to North Korea’s state-controlled news agency KCNA.

North Korean official Hwang Chol was supporting a statement from Cambodia’s foreign ministry, charging OHCHR of unauthorized activities because it had not renewed a memorandum of understanding with the ministry, according to local news service Cambodia Daily.

The Pyongyang diplomat said the U.N. office was interfering in Cambodian politics and was violating the “principle of respect for sovereignty and non-interference in domestic affairs,” KCNA reported.

“Every year the U.N. raises the issue of human rights while violating the principle of fairness when discussing human rights and showing sympathy for hostile acts against sovereign states,” Hwang said.

The dispute has origins in a disagreement between Cambodia and the U.N. office after the U.N. criticized the government’s decision to exile opposition leader Sam Rainsy.

Phnom Penh is refusing to renew the MOU unless the U.N. adds new language that states it respects Cambodia’s sovereignty and agrees to stay out of domestic affairs.

North Korea has previously had issues with the OHCHR, when it decided to open an office in South Korea in 2015.

“We regard it as a political plot aimed at overthrowing the social system of [North Korea] by fabricating and propagandizing the human rights issues of [the country],” a North Korean envoy said at the time.

North Korea claims its human rights record is pristine and refuses to accept international meddling in its domestic affairs. 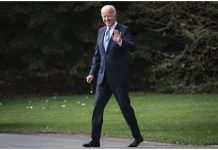 Biden speaks on human rights at rededication of Dodd Center in Conn.