Jan. 20 (UPI) — A Norwegian Air flight from New York to London this week broke the record for the fastest transatlantic flight in a conventional passenger aircraft, taking the 2015 record from British Airways.

The Boeing 787 Dreamliner touched down Monday in London 53 minutes ahead of schedule, in a record 5 hours, 13 minutes for the 3,458-mile trip. The previous record was achieved by British Airways for a 5-hour, 16-minute flight.

The Norwegian flight reached speeds up to 776 mph while riding jet-stream winds up to 202 mph. Those winds allow for faster journey times and fuel conservation but they can be difficult to maneuver in because of the jet stream’s width and depth — 10 miles across and 2,000 feet deep.

Flight captain Harold van Dam told The Times of London he thinks he could’ve made the trip in even faster time.

“The 787 Dreamliner is a pleasure to fly, and it’s a great feeling to know that we have set a new record in this aircraft,” he said. “We were actually in the air for just over five hours and if it had not been for forecasted turbulence at lower altitude, we could have flown even faster.” 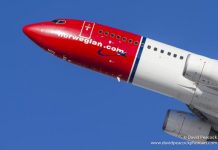