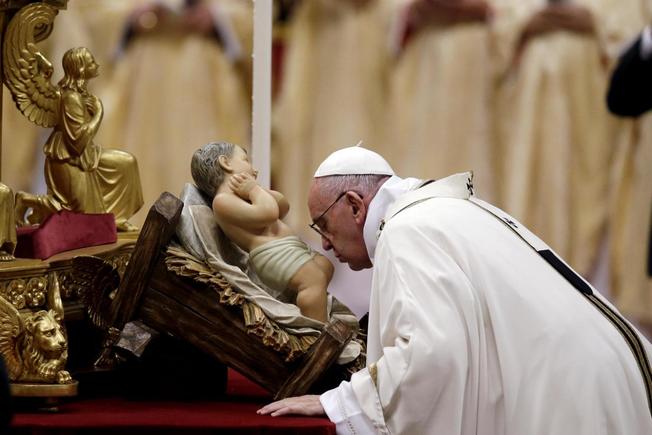 The pontiff called Christmas the time to “once more rediscover who we are.”

Christians around the world are joyfully preparing to recall the birth of Jesus. But in the splendor of St. Peter’s Basilica, the pope balanced his joy with a sadness for what he described as a “culture of indifference, which can often turn ruthless.”

As he recalled Jesus’ birth in a Bethlehem stable, the pope said the child was “born into the poverty of this world; there was no room in the inn for him and his family.”

Since he was elected pope in 2013, Francis has tried to shape the church into one marked more by loving mercy than rigid judgment. He insists that the needs of the poor and others, including refugees and migrants, are most important.

Youngsters from countries that Francis has visited as pope, including Sri Lanka, the Philippines, the United States and three African nations, left floral bouquets around a baby Jesus statue after Francis unveiled and gently kissed it.

On Friday, tens of thousands are expected in St. Peter’s Square to hear the traditional Christmas day speech, which is often used by the pope to denounce wars, other violence and injustice across the globe.