His comments came during a news conference following a meeting with Hungarian Prime Minister Viktor Orban at the Kremlin.

Putin said he was reviewing the United States and NATO’s written responses to the security demands, which Moscow received last week.

“It is already clear … that the fundamental Russian concerns were ignored,” he said, according to Russia’s state-run Tass news agency.

“The second inalienable part says that no one should be allowed to strengthen their security at the expense of the security of other states.

Officials said U.S. Secretary of State Antony Blinken and Russian Foreign Minister Sergey Lavrov were expected to speak Tuesday with a goal of heading off further military escalation near Russia’s border with Ukraine.

Tuesday’s phone call is another effort by the United States and Western nations to dissuade Russia from an incursion into Ukraine — similar to the Security Council’s meeting in New York City on Monday, which came after a request from U.S. President Joe Biden’s administration.

“We continue to engage in non-stop diplomacy and to de-escalate tensions and attempt like the devil to improve security for our allies and partners and for all of Europe, for that matter,” Biden said Monday.

Blinken and Lavrov met in person on Jan. 21 in Geneva with the same goal. No breakthroughs came in Switzerland, but both sides agreed to keep talking.

At Monday’s Security Council meeting, U.S. Ambassador to the U.N. Linda Thomas-Greenfield warned Moscow against military intervention — and emphasized that the United States and Western allies want a “path of peace” and dialogue.

Russian Ambassador to the U.N. Vasily Nebenzya countered by accusing the United States of “provoking” the conflict, and said that Moscow has no plans to cross the border into Ukraine.

U.S. officials say they have received a written response from Russia about questions they posed after the last meeting between Blinken and Lavrov. The White House didn’t detail the answers, saying that it wouldn’t be productive to negotiate in public.

The Kremlin, however, also denied that it had submitted a response to U.S. concerns. Russian Deputy Foreign Minister Alexander Grushko told state-run news agency RIA Novosti that the response was still being prepared. 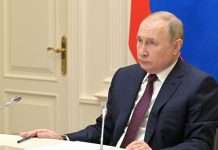