The dinosaur bones were first found by a group of amateur fossil hunters beside a creek in Montgomery, Alabama. Dino bones are rare in the South, and those with an intact skull are even rarer.

The fossil is one of the most complete dino skeletons found in the region and the earliest hadrosaur.

Realizing the enormity of their discovery, the team of amateur scientists called in some seasoned paleontologists to take over the dig.

“This is a really important animal in telling us how they came to be and how they spread all over the world,” Gregory Erickson, a paleobiologist at Florida State and one of the scientists called to the scene, said in a press release.

The new species, named Eotrachodon orientalis, is described in the Journal of Vertebrate Paleontology. Its name translates as “dawn rough tooth from the east,” while Trachodon serves as a nod to the first duck-billed dino named by paleontologists in 1856.

The bones are 83 million years old, making this species the earliest duck-billed dinosaur from Appalachia and proof that hadrosaurs got their start in the region. North America was bisected by an ocean connecting the Gulf of Mexico and the Arctic Ocean some 85 million years ago; to the west was Laramidia, and in the east was Appalachia.

“For roughly 100 million years, the dinosaurs were not able to cross this barrier,” explained Jun Ebersole, a former Florida State doctoral student and now director of collections at McWane Science Center at the University of Bristol in England.

“The discovery of Eotrachodon suggests that duck-billed dinosaurs originated in Appalachia and dispersed to other parts of the world at some point after the seaway lowered, opening a land corridor to western North America,” Ebersole added.

Eotrachodon orientalis is a primitive version of the dino that “became the cows of the Cretaceous,” according to Erickson.

It stretched between 20 to 30 feet long at full maturity and boasted a scaly exterior. Though it walked on its hind legs, it could get down on fours to chomp on plant life. And like many of its later relatives, it was marked by its crested nose.

“This thing had a big ugly nose,” Erickson said. 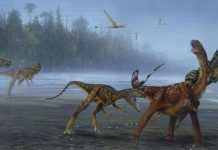 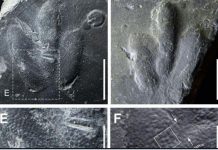 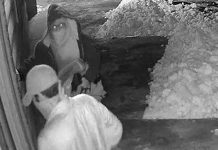