June 29 (UPI) — A St. Louis couple pointed guns at protesters as they marched along private Portland Place on their way to Mayor Lyda Krewson’s home to demand her resignation.

“Let’s go!” and drum beating could be heard among protesters as they went down the street Sunday. The couple, Mark T. McCloskey, 63, and Patricia N. McCloskey, 61, pointed guns and told protesters to get away. The couple, who are personal injury lawyers at The McCloskey Law Center, were outside of their million-dollar home.

The McCloskeys told police protesters broke through an iron pedestrian gate to access the private street.

Mark McCloskey told KMOV4 Monday that he and his family felt threatened.

“A mob of at least 100 smashed through the historic wrought iron gates of Portland Place, destroying them, rushed towards my home where my family was having dinner outside and put us in fear for our lives,” Mark McCloskey said.

However, video circulating online showed protesters walking through an unbroken gate, according to KMOV4, and it’s uncertain when it was damaged or who destroyed it.

“We must protect the right to peacefully protest, and any attempt to chill it through intimidation or threat of deadly force will not be tolerated,” Gardner said. “Make no mistake: we will not tolerate the use of force against those exercising their First Amendment rights, and will use the full power of Missouri law to hold people accountable.”

St. Louis University constitutional law professor Anders Walker, on the other hand, said although it was “very dangerous” to point guns at protesters, since Portland Place is a private street they are protected by Missouri’s Castle Doctrine that allows people to use deadly force to protect private property.

Later on Sunday night, protesters made their way to Mayor Krewson’s house where they painted “RESIGN” on the street in front of it.

Protesters were upset that Krewson released names and addresses of residents advocating for cutting the police department’s funding, including those advocating for police funding to go to affordable housing and a new program to curb violence while giving a briefing on Facebook Live Friday.

Krewson apologized Friday night for identifying the individuals, but she was still accused of endangering them.

“It was irresponsible for the mayor to publicize the names and addresses of her constituents, who were exercising the constitutional right to free speech to petition their government,” St. Louis Treasurer Tishaura O. Jones said in a thread of tweets. “The mayor’s actions not only endanger her citizens, it is also reckless. The timing of her disclosure is ironically the day before an alt-right/KKK rally in our city.”

“I echo the calls for Mayor Krewson’s resignation,” Jones continued. “Constituents should not fear retaliation for expressing their opinions on how our government aligns its spending priorities.”

State Rep. Rasheen Aldridge, D-St. Louis, addressed the matter while speaking at a megaphone at the protest Sunday.

“As a leader, you don’t do stuff like that,” Aldridge said. “It’s only right that we visit her at her home.”

Emails to elected officials are generally considered public records, but are usually only released after a formal request, so Rev. Darryl Gray said that what Krewson did was not illegal, but immoral.

An online Change.org petition demanding Krewson’s resignation had more than 48,000 signatures at about 4:30 p.m. Monday. 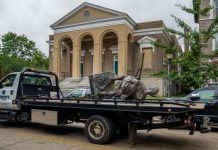 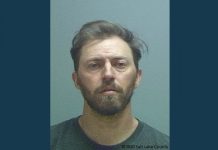 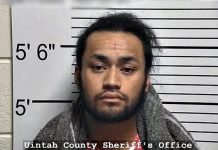