July 31 (UPI) — Two Texas men have admitted to stealing a shark from an aquarium in San Antonio and hiding it in a baby stroller, police said Monday.

The incident occurred on Saturday and was caught on surveillance video from inside the San Antonio Aquarium. That video shows one of the men standing over an open-top aquarium and grabbing the 1.5-foot-long horn shark out of the water with his hands. He then appears to nod to his accomplice, who is holding a bag and the two walk off-camera.

Leon Valley Police Chief Joseph Salvaggio said the pair put the shark into the bag and then into a bucket that was hidden inside a baby stroller, which they used to exit the aquarium to try to avoid suspicion.

In a Facebook post, the San Antonio Aquarium said an employee saw the man take the shark out of the water and alerted management. When the men tried to leave, a manager asked if he could search their vehicle, but the men denied that request and left.

But aquarium employees were able to record the license plate number of the vehicle the men were in and gave it to police, who quickly located the suspected shark snatchers. Turned out, the shark was in good health because the suspects have had experience with marine animals and had the shark in a proper environment.

“Luckily the thief was someone who knew what he was doing,” Salvaggio told KABB-TV.

A local ad advertising a shark for sale for $300 may be related to the case. 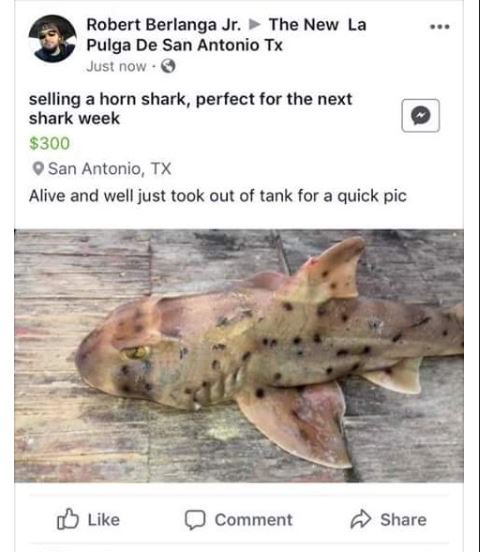 A possible shark theft suspect posted on Facebook selling the horn shark for $300. “selling a horn shark, perfect for the next shark week. Alive and well just took out of tank for a quick pic”

The shark made it back to the aquarium safely.

The suspects, who have not been named in media reports, face felony charges for theft.