June 11 (UPI) — One of the former Minneapolis police officer charged in connection to the police-involved killing of George Floyd has been released on bond, according to records from the Hennepin County Sheriff’s Office.

Thomas Lane, 37, and two other former Minneapolis police officers were charged with aiding and abetting murder in the second-degree for failing to help Floyd, 46, who pleaded he couldn’t breathe while being pinned to the ground by the knee of a white police officer, Derek Chauvin, on his neck.

According to the jail records, Thomas was released shortly after 4 p.m. Wednesday. Bail was set at $1 million last week and he was let out on conditional release on a $750,000 bond.

Chauvin, 44, and the other two former officers charged with aiding and abetting — J Alexander Kueng, 26, and Tou Thao, 34 — remain in police custody, according to Hennepin County Sheriff’s Office records.

Lane’s attorney, Earl Gray, argued last week the case against his client was “weak,” stating Lane had asked Chauvin to roll Floyd onto his side during the arrest and that he had performed CPR on Floyd in the ambulance.

Lane was “pounding on this guy to revive him,” Gray said. “Where is the willful intent?” 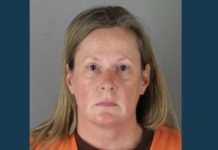