June 25 (UPI) — A Massachusetts truck driver faces seven counts of negligent homicide Monday for his role in a deadly motorcycle crash in New Hampshire over the weekend.

A warrant was issued for Zhukovskyy’s arrest, charging him with seven counts of negligent homicide in connection with the crash on Friday night that killed seven members of the Jarheads MC motorcycle club and injured three others. Police said Zhukovskyy was pulling a trailer while working for Westfield Transportation at the time of the crash.

Massachusetts police said troopers also located wax packets containing “a residue suspected of being heroin” in Zhukovskyy’s home and said he would face drug charges if the residue tests positive for drugs at the State Crime Lab.

Authorities identified the five men and two women, including a married couple, who died of blunt trauma on Friday after a pickup truck collided with the group of 10 motorcyclists in New Hampshire.

A GoFundMe campaign for the families of the victims raised more than $350,000 since launching on Saturday. 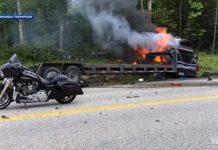