“I am pleased to announce that it is my intention to nominate Gene Scalia as the new Secretary of Labor. Gene has led a life of great success in the legal and labor field and is highly respected not only as a lawyer, but as a lawyer with great experience, working with labor and everyone else,” Trump tweeted.

Acosta resigned Friday amid increasing security over a plea agreement he helped negotiate for billionaire financier Jeffrey Epstein during his time as a federal prosecutor in Florida. Acosta said he didn’t want the Epstein case to be a distraction.

Under the Epstein deal, prosecutors reduced his federal sex trafficking charges to state prostitution charges, shaving off jail time. Critics have called the agreement too lenient.

Epstein served 13 months in jail in Palm Beach County, during which time was allowed to work from his office during the day. He also paid restitution and registered as a sex offender.

Acosta said federal prosecutors got involved in the case when it appeared as though state prosecutors didn’t charge Epstein with the proper crimes. He said the case originated with the state.

Acosta said prosecutors were worried they would not be able to convict Epstein had he gone to trial. He said at the time that his and other prosecutors’ actions on the case weren’t as scrutinized as they are now.

Krischer said that after the state charged Epstein with a felony count of solicitation of prostitution, the U.S. Attorney’s Office secured a 53-page indictment on felony charges, which he said was “abandoned after secret negotiations between Mr. Epstein’s lawyers and Mr. Acosta.”

The case is under renewed scrutiny after police arrested Epstein on two new charges related to sex trafficking. He’s accused of paying minor girls as young as 14 years old for massages and then sex acts.

He said his office was not involved in the negotiations and was not aware of the “unusual confidentiality arrangement” that withheld the deal from the victims.

On Thursday, a federal judge in New York refused bail for Epstein, saying he’s too dangerous to be on the streets and is a serious flight risk. 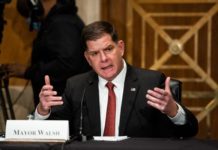